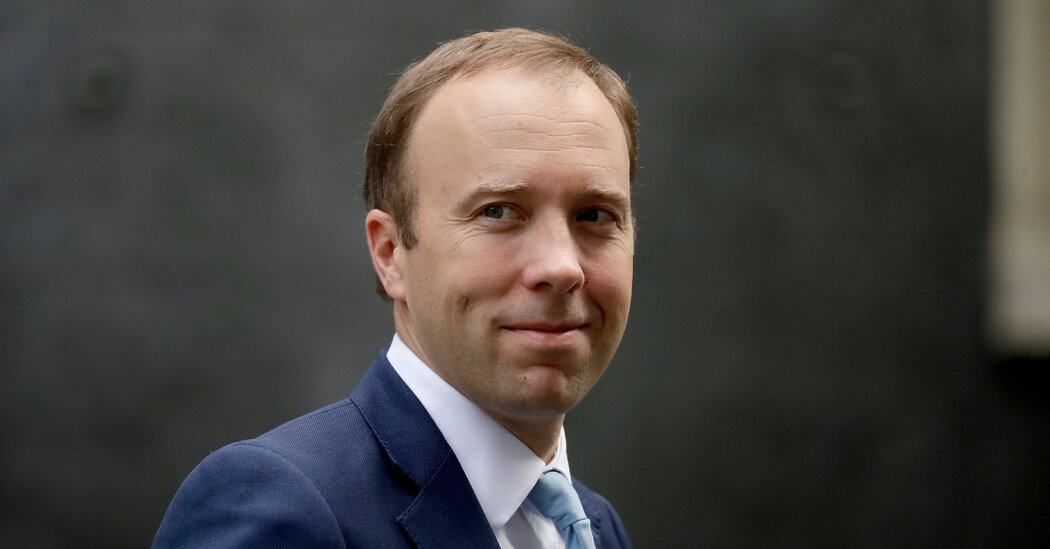 LONDON – Struggling UK Health Minister Matt Hancock resigned on Saturday, a day after a tabloid newspaper published photos of him in a hot embrace with one of his top aides – an apparent violation of UK social distancing guidelines.

Mr Hancock, who led Britain’s response to the coronavirus pandemic, was the latest member of Prime Minister Boris Johnson’s government to be accused of violating strict rules imposed on the rest of the country.

“I understand the huge sacrifices everyone in this county has made – that you have made,” Mr Hancock said chasteningly in a video statement released on Saturday night. “Those of us who make these rules must abide by them, and that is why I must resign.”

Initially, Mr Hancock refused to resign and had Mr Johnson’s backing. But with at least one Tory MP demanding his resignation and newspapers full of stories about double standards for the political elite, Mr Hancock concluded his position had become untenable.

In a letter to the Prime Minister, Mr Hancock wrote: ‘The last thing I would like is for my private life to distract from the determined purpose that is taking us out of this crisis. Mr Hancock, who is married, apologized to his family and said he must be with his three children.

It was a rapid fall from grace for an ambitious 42-year-old minister, who had become a familiar figure during the long months of the pandemic. Mr Hancock was a fixture at Downing Street press conferences, often urging the public to obey lockdowns and other restrictions to try to curb the spread of the virus.

Ultimately, Mr. Hancock’s failure to live by his own rules destroyed him. The Sun posted footage – and later a video – of a surveillance camera in Mr Hancock’s office which showed him kissing and kissing Gina Coladangelo, a friend from Oxford University he had recruited as advisor.

Newspapers reported that the footage was recorded on May 6, when restrictions in England still prohibited social gatherings inside people from different households. People were told to stay two meters apart and avoid “face to face contact”. These restrictions have since been relaxed.

Mr Hancock admitted to breaking the rules. On Friday he said he was “very sorry” and had “disappointed people”. Downing Street initially said the Prime Minister accepted Mr Hancock’s apology and considered the matter closed.

Even before he was engulfed in the scandal, Mr Hancock had become somewhat of a lightning rod for the controversy. Two weeks ago a former chief adviser to Mr Johnson, Dominic Cummings, posted text messages between him and the Prime Minister in which Mr Johnson called Mr Hancock “desperate”, adding blasphemy.

Mr Cummings blamed much of the responsibility for Britain’s chaotic handling of the pandemic on Mr Hancock, saying he did not have a competent testing and traceability program in place and allowed the spread of the virus by moving the elderly from hospitals to nursing care. houses. Mr Hancock categorically denied the charges.

Mr Cummings himself was criticized a year ago for traveling 260 miles to visit his parents in the north of England when the country was under lockdown. He too refused to step down and lasted another six months before Mr Johnson ousted him.

The Labor Party, which has tried to make the scandals in Mr Johnson’s government a political issue, criticized him for not acting faster in this latest episode. “Matt Hancock is right to step down,” Labor leader Keir Starmer said on Twitter. “But Boris Johnson should have sacked him.”

There are other outstanding issues. One concerns the circumstances of Mr Hancock’s hiring of Ms Coladangelo, who is also married, as a non-executive director of the health service. She had previously worked for a fashion retailer, Oliver Bonas, founded by her husband, Oliver Tress.

Another concerns the installation of a surveillance camera in Mr. Hancock’s office. Some experts have suggested it could have been done clandestinely to catch the minister in his private entanglements.

When news of Mr Hancock’s indiscretions broke on Friday, political analysts said he could survive the fury because he worked for Mr Johnson, who had his own messy private life and recently married for the third time.

In a letter accepting Mr Hancock’s resignation, Mr Johnson awarded him with building a network of field hospitals to handle the flood of Covid patients; deploy the drug, Dexamethasone, to mitigate the effects of Covid; and secure protective equipment for doctors and nurses.

“It has been your task to take on a challenge greater than that which one of your predecessors faced,” Mr Johnson wrote, “and by fighting Covid you have taken on that challenge. “