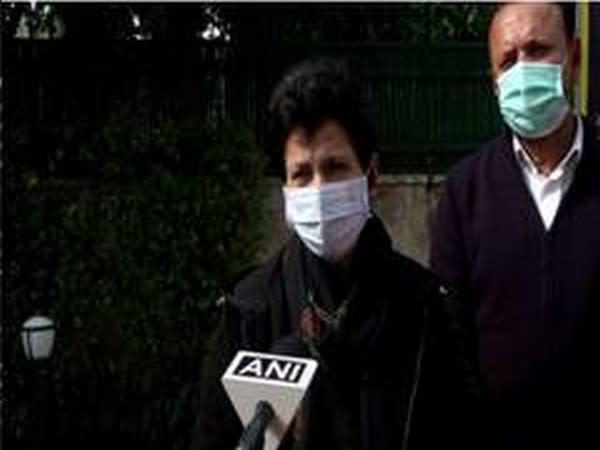 Chandigarh (Haryana) [India], Sep 12 (ANI): Haryana Congress leader Kumari Selja said on Saturday that the central and state governments of the BJP wanted to impose the RSS agenda in the country.

“Today the constitutional rights of the people are being crushed. Defenders of this will have to come forward and protect the Constitution,” said Kumari Selja, chairman of the Haryana Pradesh congressional committee.

She was speaking to lawyers as the main guest at the Haryana Congressional Legal Department’s induction ceremony on Saturday. During the program, letters of appointment were also formally delivered to newly appointed department heads.

Addressing the function, Selja said that since the country’s independence until now, lawyers have made an incomparable contribution to the development of the country.

“Before independence, whether we are talking about Lala Lajpat Rai or Mahatma Gandhi, the country’s first Prime Minister, Jawaharlal Nehru, the architect of the Constitution, Dr Bhimrao Ambedkar or Iron Man Sardar Vallabhbhai Patel, all have acted as defenders of the independence and development of the country and made great contributions. But since the BJP government was formed, there has been a campaign to implement the RSS agenda by circumventing the Constitution. The Constitution is blown away. Even the country’s constitutional institutions, be it the Election Commission or the CBI, ED, the Income Tax Department or the judiciary, are used against opponents by interfering with constitutionally guaranteed rights of all countries in the past, in the same way that even today lawyers must come forward and help protect the Constitution so that the existence of these constitutions can weaken national institutions. can be saved and the BJP cannot alter the Constitution in any way, ”she said.

Kumari Selja said that so far the internet has been banned 16 times in Haryana in districts like Jind, Panipat, Kaithal, Kurukshetra. India is far ahead in the world in terms of internet bans.

“The internet has been banned about 32 times in the country so far this year. Due to the shutdown of internet service, not only the common man faces problems, but the country’s economic system is also suffering a lot. In 2020, there was an internet ban for 8,927 hours due to which the government suffered a financial loss of approximately Rs 20,000 crore. Modi ji and his Hindu nationalist government BJP are directly responsible for all of this, ”said the Haryana congressional leader.

“Under Modi’s watch, human rights groups have come under pressure, journalists and activists are threatened and there has been a wave of attacks against Muslims in particular. This has led to the loss of political and civil liberties in the country. freedom of expression, media and civil society took center stage during Modi’s reign. India is becoming an autocratic country, ”said Selja.

Special guest Vipul Maheshwari said that the way the BJP brings new rules, laws and policies, the basic spirit of the Constitution is in jeopardy. “The BJP passes such bills using the power of their numbers in parliament, which is a direct attack on the Constitution. He said only lawyers can resist such laws. Advocates that they must protect the rights given by the Constitution while interpreting the Constitution and not only register their protest against the laws enacted against the Constitution, but also sensitize others by organizing seminars from time to time, ”said Maheshwari.

Presiding over the function, the attorney for the president of the state, Lal Bahadur Khowal, said that lawyers are seen as the leaders of the intelligentsia. “In such a situation, it also becomes our duty to protect the rights of the poor, weak, needy and organizationally exploited sections. He called on the defenders present to launch such a campaign in the country and the state, the benefit of which reaches the section concerned. In addition to raising awareness of their rights, expose the BJP RSS-inspired agenda and unite them so that unconstitutional BJP policies can be firmly opposed, ”Khowal said.

Earlier, the State Chairman of the Haryana Legal Department, Lawyer Lal Bahadur Khowal and his team warmly welcomed the guest of honor, Kumari Selja, and Vipul Maheshwari, the national secretary general of the department, in offering flowers, garlands and bouquets.

The Liberals have used the courts to block Trump’s agenda. Republicans use the same playbook against Biden.