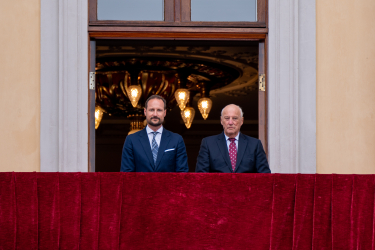 King Harald and Crown Prince Haakon of Norway made a joint appearance on the balcony of the Royal Palace to greet a military parade.

But this was not just any military event; it was the annual performance of the 3rd Guard Company, which consists of approximately 130 servicemen, who are recruited in early fall and train through the fall and winter, then leave for concerts , exhibitions and other performances at home and abroad in spring and summer.

The King and Crown Prince made an appearance on the balcony, from where they watched the performance of the 3rd Company, and also waved to the crowd that had gathered in the Royal Palace Square to watch the parade.

The event came just a day after King Harald returned from a three-day visit to the western counties of Møre and Romsdal aboard the royal yacht, which served as their home base and was also the venue where King and Queen Sonja hosted a reception on the last day of their tour.

Meanwhile, Crown Prince Haakon was opening the Arctic University of Norway’s Golden Jubilee celebrations, following in the footsteps of his grandfather, King Olav V, who opened the institution in 1972. The university is also the entity that organized the arctic research expedition in which the crown prince took part earlier this year.

It was reassuring to see King Harald step out in the final days of summer, as he battled health issues for most of 2022. In March he was diagnosed with COVID-19, and in August , he was admitted to the hospital for four days to fight an infection.