Dianne Maroney-Grigsby, director and choreographer of Grambling State University’s Orchesis Dance Company, is retiring after nearly 40 years in the role.

But the lady known for her rambunctious personality will step out “sparking the fantastic light” as Extensions of Excellence Performing Arts Inc. presents “The Choreographer’s Last Dance” at 7 p.m. Saturday at the Strand Theater in Shreveport, Louisiana.
Members of the Orchesis Dance Company will join Legacy Dance in the 13th annual Dance His Praise show honoring the choreographer.

“For her, dance isn’t just an art form, it’s a lifestyle,” Orchesis member Octavia Hill said of Maroney-Grigsby. “It’s about life. You have to be on time, every day. You’ll miss something if you don’t come every day. You miss a day, you feel like you’ve missed an entire week. She taught us so many things. »

And she brought with her a lifelong love for dance.

That love was born as an elementary school student growing up in Norfolk, Virginia, but it was cemented when an opportunity for Maroney-Grigsby to audition for the Norfolk State Dance Theater led to meeting nationally acclaimed master Inez Howard, founder of the National Black College Dance. To exchange.

“Inez Howard was the person who opened my eyes,” Maroney-Grigsby said. “I thought I had danced until I met her, but she opened up a whole new world of dance to me. She changed my life forever.

Howard warned Maroney-Grigsby of her limited prospects as a dancer with no changes to a healthier lifestyle, including losing weight. Howard also took Maroney-Grigsby to see a performance by Alvin Ailey’s dance company and introduced the young dancer to Dan Wagner at the American Dance Festival in Richmond, Virginia.

It was Wagner who helped Maroney-Grigsby receive a scholarship to study dance in New York.

Maroney-Grigsby solidified her love of dancing in the “Big Apple”, improving her skills and knowledge and joining the Alvin Ailey Repertory Ensemble, touring the United States extensively. She has also performed with the Alvin Ailey American Dance Theater, touring Europe, Asia and Africa.

She said it was there that she solidified her love and commitment to dance, qualities she passed on to her students over the years.

“Engagement is a big thing for her,” said Orchesis member Jasmine Crawford. “Because in life, you will have to find your commitments. Whatever you do, you have to stick with it. You have to stay strong and respect yourself. »

In 1983, Maroney-Grigsby left her positions as soloist and assistant artistic director of the Ailey Repertory Ensemble, as well as a full-time faculty member of the Alvin Ailey American Dance Center, to head south to Louisiana. to become artistic director of GSU’s Orchesis Dance Company. .

It was a move that would make her love and commitment to dance even stronger. She would go on to receive her bachelor’s degree from GSU and her master’s degree in theater from Louisiana Tech University. She was also a longtime dance teacher at both universities.

“I am indebted to so many people like Inez Howard and Dan Wagner,” Maroney-Grisby said. “They both left their mark on my life and taught me how to do it for the students I taught. Coming to Grambling has changed my life and made me stronger than ever. 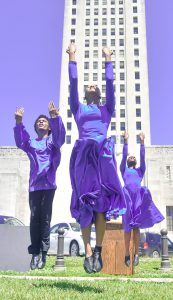 She has also conducted Orchesis at performances in Japan and across America, from New York to California. Under his leadership, Orchesis has been featured in national Proctor and Gamble television commercials, live appearances with recording artist Vickie Winans, and with the GSU World-Famed band Tiger Marching in the hit movie “Drumline.”

Grigsby-Maroney continues to have a big impact on Orchesis members today.

“I met Ms. Maroney my senior year in high school,” Hill said. “I was interested in dance at university. I didn’t know where. She came to our class, and she’s funny…full of personality and life. Even though it’s her last dance, she doesn’t make it look like that. Her love of dance is somehow imprinted in all of us. She does it like that.

Crawford said Maroney-Grigsby is the fuel that builds the fiery love of dance for the members of Orchesis.

“Just the energy she gives off is so precious,” Crawford said. “We feed on his energy. Everything she does is just personality. She gives us advice. She tells us stories — I love her stories. He’s just a wonderful being to work with. And her love of dance is very passionate.

While Saturday’s performance is titled “The Choreographer’s Last Dance,” Maroney-Grigsby said her love and commitment to the art will continue.

“I’m not giving up,” she said. “I’m just not going to be at Grambling or Louisiana Tech,” Maroney-Grigsby said. “I will continue to choreograph and give lessons. “The Choreographer’s Last Dance” was just a hook the producer (Vincent Williams) came up with to get people’s attention. And it’s catchy. But this change will give me a lot more time to do other things. It’s time to be able to be a part of it too.

Tickets for Saturday’s performance of “The Choreographer’s Last Dance” will cost $25. To order tickets or for more information about the show, call The Strand Box Office at 318-226-8555 or go online at thestrandtheatre.com.

The Orchesis members who star in the production see this opportunity as a chance to honor and show their love for their longtime mento in dance and life skills.

“Thank you for being there…for inspiring us,” Orchesis member Jada Thompson told Maroney-Grigsby. “We really appreciate you. We thank you for everything you have done.